‘When you’re wheeling Ruby down the corridor, you get people stopping you, asking
“What’s that?” and when you explain, the next question is “can I have a go?”.’

Reval Ruby is a mobile shower system that allows your bed to become your shower and it’s a couple of years now since she came to live at Spurr House Short Stay Service.

Ruby was an unexpected find at a care show conference which we brought back to Persona on a two month trial from Reval CC.  The feedback from customers and relatives was amazing and staff liked it too, so we were keen to have Ruby permanently.  'I don’t think I really believed it feels as nice as it does, but your bed really does become a bath.  It’s really comfortable’, says one staff member. 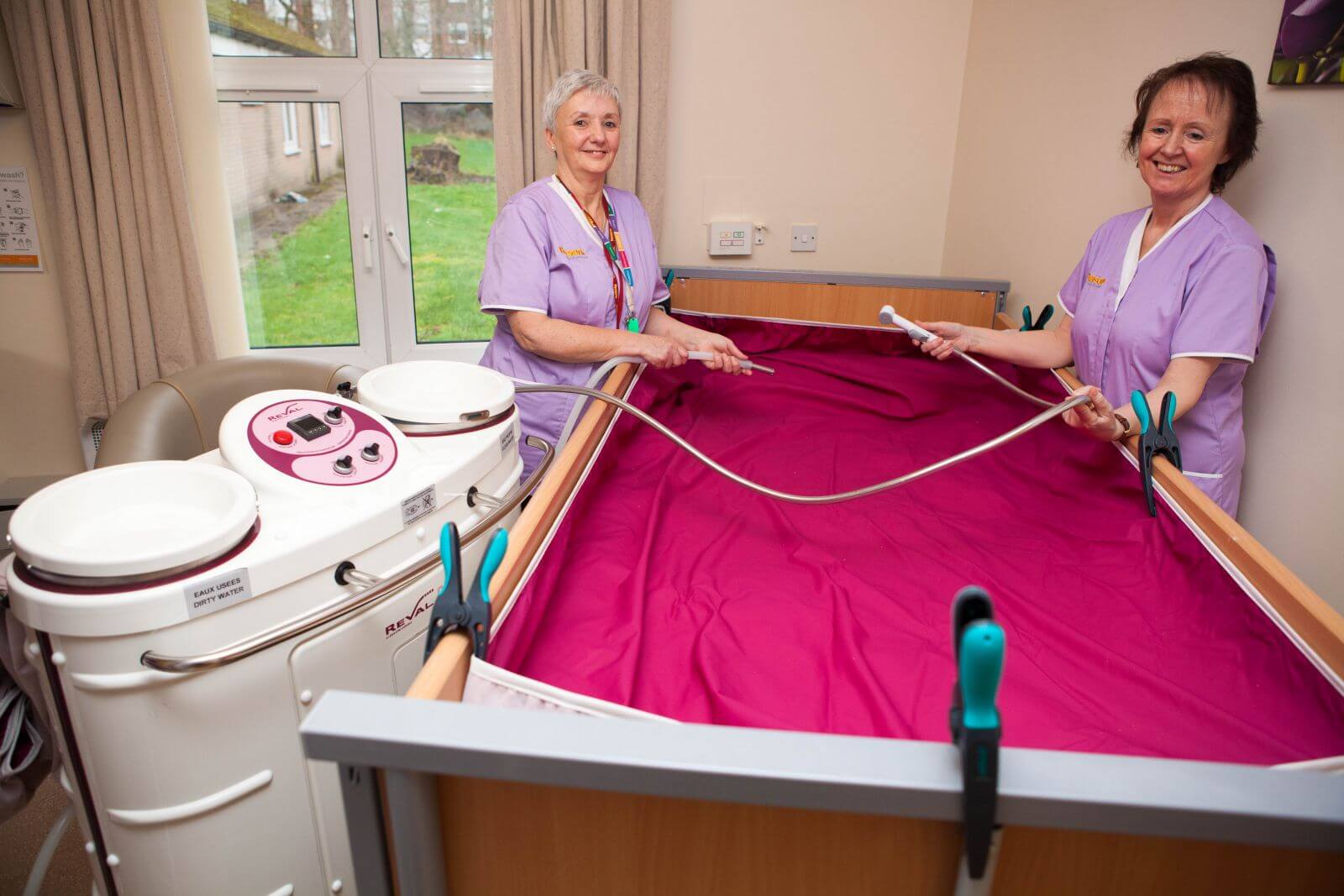 The term ‘assisted bathing’ doesn’t have a terribly warm, relaxing ring to it, but Ruby changes that, with one customer referring to Ruby as a ‘spa experience’, after she had gone for some time without being able to have a bath or a shower.  ‘All I’m missing now is the candles and the music’ she quipped.  So the next time she used Ruby, the staff made sure she had some music playing for an even better experience.

Over time, we have found that Ruby has positive effects on customers in other ways too.  One lady, in the later stages of dementia, wouldn’t let anyone do any personal care for her; even hitting out at her own daughter whenever she tried to care for her at home, so she hadn’t had a shower for ages.  When she was finally convinced to try Ruby, her daughter asked if she could be there too.  The lady was so content and relaxed during the experience that her daughter commented she had never seen her so happy having a shower or bath.

But it’s not just the customers who find Ruby a great asset to their stay at Spurr House; she has very much become something the staff own and take pride in.  They appreciate the investment in their service and the options it gives them to offer something different and a bit special to their customers.

Sue and Maggie, both care assistants at Spurr House, say they enjoy the opportunity to convince sceptical or apprehensive customers to give Ruby a go – they love to see people’s reactions when they’ve tried it!  ‘You do get some customers in who say ‘I’m not having a bath’ but with Ruby, they almost won’t realise they are having one, so we can say ‘Ok, we won’t give you a bath, we’ll do it here in your bed and give you a proper wash with lots of warm water’ Maggie says.  ‘They are really grateful afterwards and they always ask for it again when they’ve tried it’ adds Sue, ‘both men and women enjoy it.’ 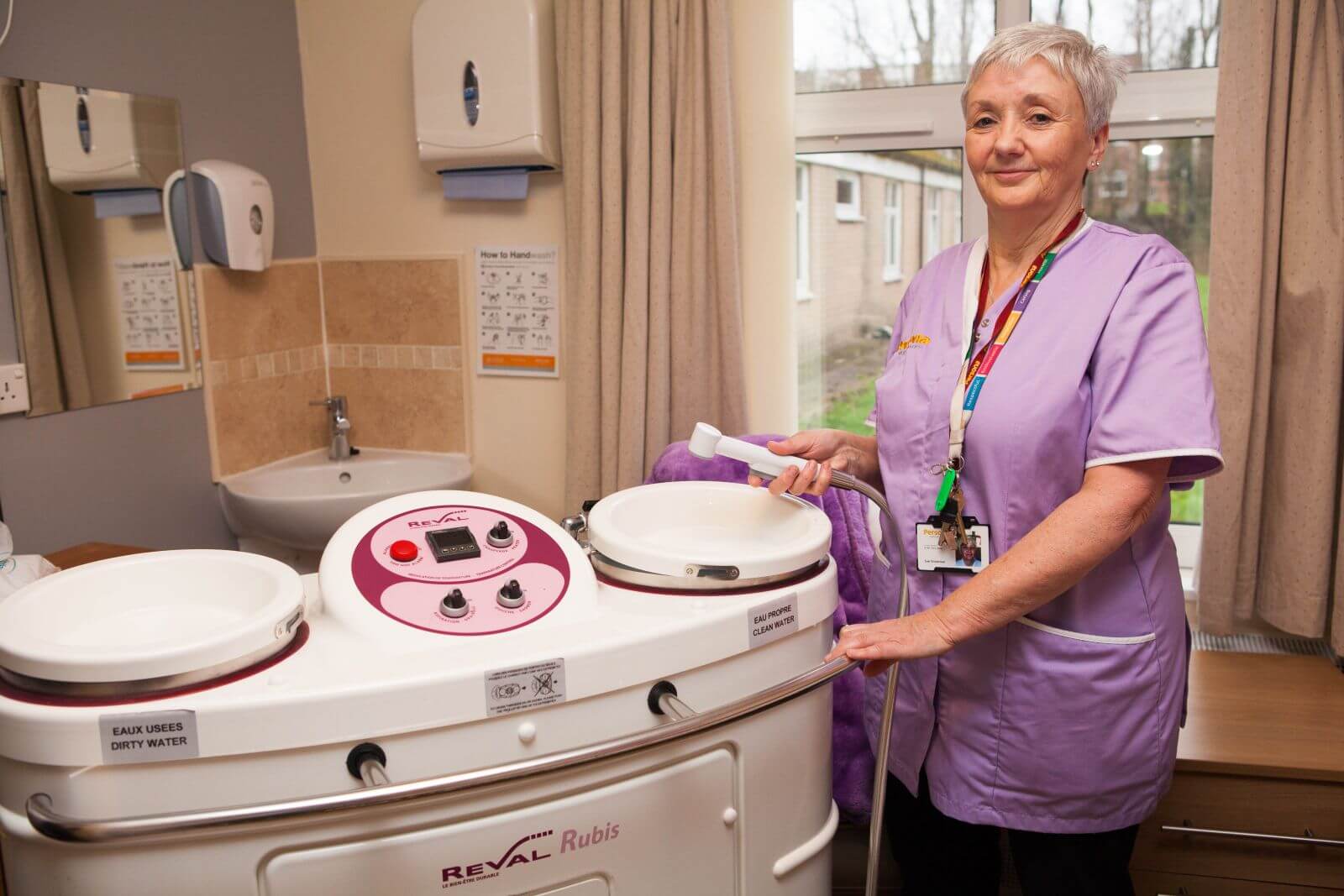 Staff find Ruby easy to use and it means they can offer a warm bath to people who previously didn’t have that option, for example those who find it too painful to be moved into a bath or shower.  Ruby can mean that, dependent on a person’s needs, less time is spent manoeuvring people and so more time can be spent bathing them.  Sue comments however, that Ruby can sometimes be a little more time consuming than showering someone ‘but if it benefits them, I’m quite happy to use it if it means we can give someone a proper wash who wouldn’t get one without Ruby’.

Ruby adds something innovative to our short stay service; we can take in a broader range of customers and provide a fuller experience for them.  She makes it possible for people who are bedbound to actively participate in their bath, which they don’t normally get the chance to do.  Some people won’t have a bath; Ruby enables simpler, more private bathing.  Poor personal hygiene is not only an infection risk but can affect people’s self-esteem and Ruby gives us an alternative way to address these issues.  ‘You’re giving them back their dignity,’ says Sue.  ‘when you’re feeling fed up, there’s nothing better than a proper wash, is there?’.

To find out more about Spurr House, click here.