Genders aside from men and women have existed for millennia, across many different cultures. It’s an innate part of human nature, and certainly nothing new, although you may have been led to believe differently by the media. Added coverage on celebrities such as Demi Lovato, Sam Smith and Jonathan Van Ness (of Queer Eye for the Straight Guy fame) has highlighted the growth in representation for the non-binary community, leading to insightful questions over many meanings of its associated terminology.

What does it mean to be Non- Binary?

In our society, we have no traditionally established non-binary gender roles, so people will choose a label and description that they feels fits them the best. There isn’t an exhaustive list of non-binary genders, nor is it a fixed thing. Like all social constructs, new ones can be established if the need arises.

A common non-binary gender is “gender fluid”. Gender fluid people hold both masculine and feminine traits, and feel that they fall into neither category of man or woman. Some days they may feel more masculine, some days more feminine, but many days just somewhere in the middle.

Another non-binary gender (or lack of_) is ‘agender’. This means that the person has no gender identity at all.

Non binary people are not confused, or in denial about their birth sex, but through their understanding of gender identity have chosen to take on a label that helps them to define and express their inner identity, and shed the constraints put on them by society from birth that they were never comfortable with.

What do the colours of the Non-Binary flag mean?

The Non Binary flag was created by 17 year old Kyle Rowan in 2014 after a call from the Non Binary community for a flag to represent them.

Yellow: Those whose gender exists outside the binary, as yellow is often used to represent something as its own.

White: Represents those who are multigender (meaning they identify with multiple and/or all genders), as white can also represent the presence of color and/or light.

Purple: Represents those who feel as though their gender is a mix of female and male, as purple is a mix of traditional boy and girl colors. Purple could also represent the fluidity & uniqueness of Non-binary individuals.

Find out more by clicking here. 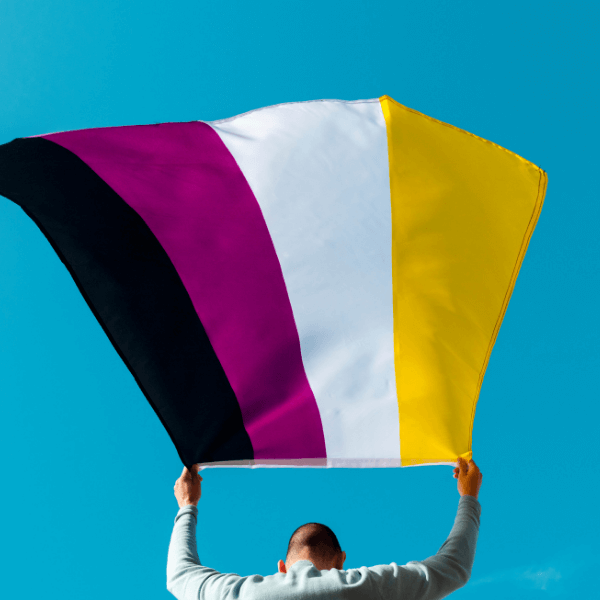 Countries such as Australia, Canada, Germany, The Netherlands and New Zealand now included non-binary gender options on passports. 18 US States also allow residents to mark their gender as ‘X’ on their driving licence.

Key Question: What pronouns and titles should I use?

If you aren’t sure what pronoun to use, just ask politely. It may feel awkward at first, but this is one of the simplest and most important ways to show respect for someone’s identity.