Manager Ruth Holder of Elmhurst tells us about how two brothers got the Christmas they both wished for. 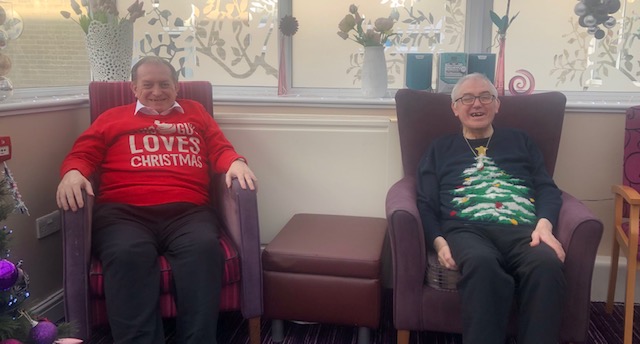 We received an emergency referral for a customer who has a mild learning disability. Their brother was their main carer and he had taken poorly and was admitted to hospital. The brothers are already supported by our Learning Disability services and have lived together all their lives. Lawrence came into our care while his brother Roy was in hospital. Lawrence was constantly anxious and asking for his brother and wanted to return home with his brother as soon as possible. Unfortunately both brothers tested positive for Covid-19 and Roy's health deteriorated whilst in hospital due to Covid-19 so Lawrence's stay was extended.

Roy returned home from hospital but unfortunately he had a further positive Covid-19 test; the boiler broke in the property and his health was not back to normal. Roy was admitted onto Spurr House's Covid-19 unit for 2 weeks' isolation. During this time both brothers were in contact with each other and although Roy was soon able to move off the Covid-19 unit onto a normal unit at Spurr House, he was required to isolate for a further 2 weeks!

On thinking about this on 9th December, I thought it would be a great idea if they could both be together at Christmas and if Roy was isolating at Spurr House, why could

he not move over to us at Elmhurst and be with his brother? On discussing this with the social worker and with Spurr House, we were able to arrange this, mainly because both brothers were pining for each other.

The day before the move I had a chat with Lawrence and said that I may have a lovely surprise for him, but that he would have to move rooms (this was so Roy could be admitted onto the same unit and they could be next door to each other). Lawrence informed me he loved a surprise! On the morning of the move Lawrence came down to breakfast in his best suit and eagerly awaited his surprise. On wheeling Roy into Elmhurst we had Lawrence sitting at the front reception with his eyes closed. On opening them his brother was in front of him, social distancing of course. All Lawrence kept asking was 'Is he real?', all the staff were so emotional and crying.

Due to the fact that Roy had to isolate, and the love between the two brothers, Lawrence decided to go back into a 2 week isolation so that they could be together during this time. They have spent every day in Roy's bedroom in their own bubble and have both thrived, both have new clothes for Christmas and their isolation ended on Christmas Eve. They are hopefully looking to return home at the start of the new year. As a team we have made two brothers very happy.